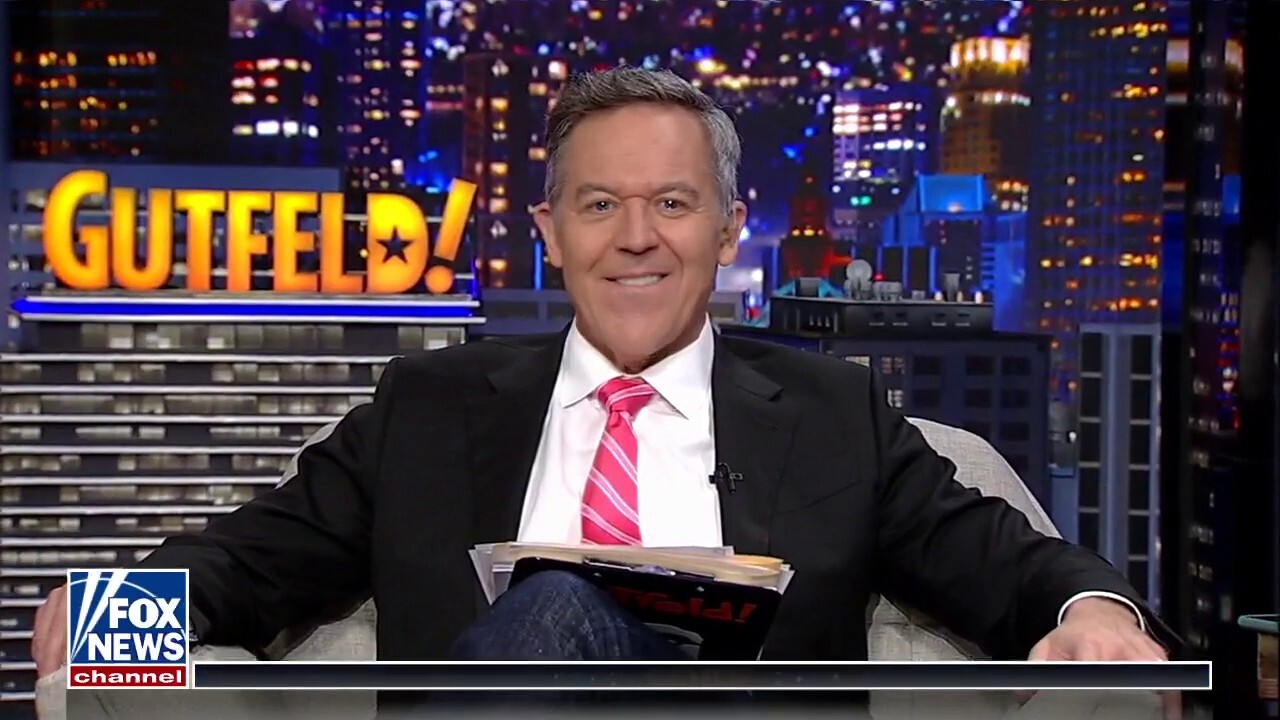 Happy Monday, my adoring and adorable fans. I’d kiss each and every one of you if I wasn’t so contagious. But thank you again for making us the most successful TV show in history. I wouldn’t believe it myself, except that there it is in a chart I made an hour ago.

You see, it shows Super Bowl 49, the final MASH episode, the last episode of Cheers, the final game of the World Series in 2016. Kat You like that one? And there’s Gutfeld! in the middle more than doubling all of that combined with 4 billion viewers.

Don’t bother checking it. The data is right there.

And we did it without our staff breaking into the Capitol. And why? Because we live in two different worlds. It’s sad. In one world, you’re the hero, and the other, you’re the villain. I could be Thor or I could be Satan. In a perfect world, I would be both.

But these worlds mirror each other like the Olsen twins trapped in a funhouse. For example, in one world, the Supreme Court justice hero would be Sonia Sotomayor and the villain would be Clarence Thomas. And the opposite universe, it would be the reverse. Fine.

But in this universe of two competing movies, we are told by the media that you can’t respect both sides. It’s one or the other —fone you can adore and the other you should hate. Yet there are 64 genders, but only one world view. So once in a while it’s good when someone comes along to remind us that it doesn’t have to be this way. Take it away Soto, talk about Clarence.

SONIA SOTOMAYOR: I have probably disagreed with him more than with any other justice that we have not joined each other’s opinions more than anybody else. And yet, Justice Thomas is the one justice in the building that literally knows every employee’s name. He is a man who cares deeply about the court as an institution, about the people who work there, but about people. He has a different vision than I do, but I think we share a common understanding about people and kindness towards them. That’s why I can be friends with him and still continue our daily battle.

That’s awesome. And it’s awesome for a reason that I’ve been talking about since I hosted that political talk show on Animal Planet back in the eighties. Now, Screw You Panda. I hosted it with Cronkite back in the day. Taught him a lot.

In this woke riddled era, any person seen commiserating with another person holding different, more unsavory opinions actually takes on that person’s terrible beliefs. You’re normalizing hate they would tell you. This contamination argument is used to keep people apart. If you are seen being nice to X than the mob on social media will come for your scalp. No offense to Liz Warren.

And it’s not just from talking to obvious clowns, but from decent people you may not see eye to eye with. And that alone means they can’t be your friends. This is not something you see among thoughtful older adults. You know, the 11 left on the planet. Hell, even pets get this. I mean, how many pictures have dogs and cats hanging out do I have to show you?

But this new idea, segregation, is brought to you by the non-thinkers coming out of our campuses where allowing a conservative speaker is considered a violent act. But if listening to speech that you disagree with is tantamount to violence, then the opposite must be true. The violent act is really just another form of speech. Don’t think of it as me cracking you in the head with a bat. Think of it as a disagreement with you by reading you a strongly worded letter with a nail at the end of it.

This is what happened at the Washington Post. A writer retweets a joke and a coworker calls him out on Twitter as opposed to doing the adult thing, which is ignore it. Or if you’re pissed off, you walk over to his office and you tell him why.

But you see, doing it face to face takes a little internal fortitude. Something you couldn’t find at the WaPo or any similar outlet, because it’s mostly babies these days. So instead, I’ll just run to Twitter and have all my likeminded, thin skinned, unhappy friends gang up on you because there’s safety in numbers, even if half those numbers are really bots.

Of course, you could just not laugh at the joke you don’t find funny because you know you aren’t the center of the universe. Unless Copernicus was wrong. You know, scientists haven’t had a great record lately. What does he know?

But adults do that. And these people aren’t adults. They are brats who see cooperation as a weakness and tantrums as heroism. So they shut down discourse. They call you evil, and that’s the end of it. See, we don’t have a lot of adults in media anymore. They find mean tweets to be hateful speech, but endorse violence or harassment in the name of justice, whether it’s BLM, Antifa or Joy Behar when she runs out of foundation and Hostess Moon Pies. That logic is as upside down as a Joe Biden bike ride.

So the WaPo staffer continued to crap on her coworkers like she mistook Ex-Lax for a brownie until she got canned, thankfully.

So you don’t settle stuff privately. You don’t run to Twitter to look for allies in your personal crusade. I bring this up as a contrast to Sotomayor. She violated this new golden rule in discourse. She treated an ideological adversary as a human being, which is now lacking these days.

These days, if you disagree with someone — well, a wise man, he said it better than I ever could.

GUTFELD JANUARY 7, 2011: And if you disagree with me, you’re a racist homophobe who is worse than Hitler.

GUTFELD, SEPTEMBER 21, 2009: And if you disagree with me that you’re probably a racist Nazi who’s worse than Hitler.

Wow. That was a while ago, but I called it like a Babe Ruth home run. And it’s also hard to believe how much better looking I got since then. Sorry, Caitlin. You know, you weren’t the only one who got hotter with age. Yeah. Yeah. Welcome to the show, by the way. Always a pleasure. At least for me. Well, you could say I transitioned from hunky to super hunky, and I want that to be my pronoun. But I am like a fine wine. The older I get, the more I’m worth, the better my taste. And I still enjoy a good corking.

Oh, still I won’t hold my breath waiting for the other networks to show people getting along, even if they disagree.

Tonight on the Chess News Network.

STAFFER 1: David R. Brooks for the Chess News Network covering how political divisions are tearing apart friendships, marriages and sewing circles. Here’s a couple that thinks they’re in love right now. Sir. Sir. Sir, did you and your wife vote the same in the last election?

STAFFER 2: No. She voted Republican. I voted Democrat. It was okay. It’s fine.

STAFFER 1: And Miss, Did you know that your husband still texts his ex-girlfriend?

STAFFER 3: I thought you deleted her from your phone.

STAFFER 1: He has two phones.

STAFFER 2: I have two phones for work.

STAFFER 2: Well, at least one of us knows how to cook

STAFFER 3: You work at the drive thru.

STAFFER 1: Proof that different political views doom a relationship. Back to you Grim.

It would be nice if my counterparts might show that clip of Sotomayor praising Thomas. Like a school kid, I want less division. But they probably can’t because if you said nice things about Clarence Thomas, you might as well say nice things about Hitler. And if you disagree with me on that, then you certainly are worse than what’s his name.

Greg Gutfeld currently serves as host of FOX News Channel’s (FNC) “Gutfeld!” (weekdays 11PM/ET) and co-host of “The Five” (weekdays 5PM/ET). He joined the network in 2007 as a contributor. He is the author of several books. His latest is “The Plus: Self-Help for People Who Hate Self-Help.” Click here for more information on Greg Gutfeld.