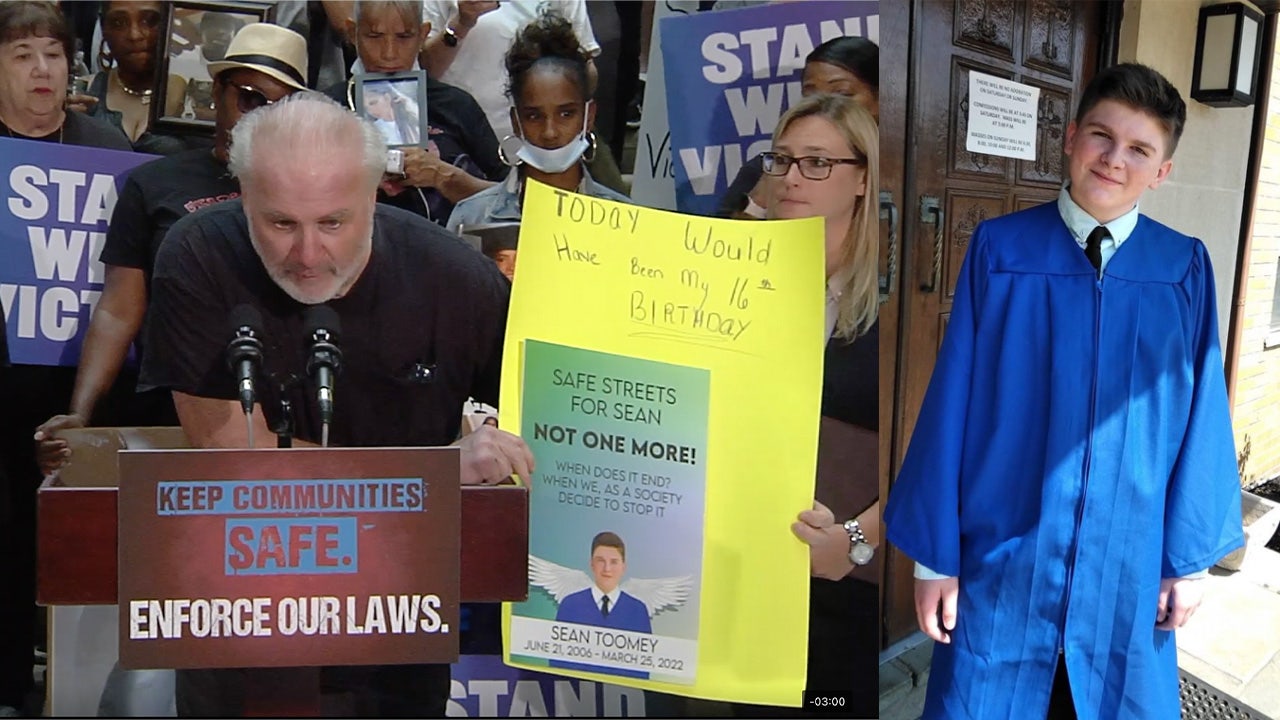 Nakisha Lewis, the mother of 21-year-old Domonic Billa, who was murdered at a Philadelphia mall in March 2021, blasted Krasner at a press conference held in the rotunda of the state’s capitol building in Harrisburg, Pennsylvania.

“The pain that is deep in my heart is so deep that sometimes I don’t want to live,” she said, standing at a podium with a crowd of supporters behind her. “The lawlessness that has gone on in Philadelphia is beyond out of control.”

She continued, “I’m begging you, we need to do whatever it takes for change.”

Her son had gone to the mall March 29 to buy a pair of pants for a job interview when he was shot, she said.

A photo combination of John Toomey speaking at a press conference June 21 about his son’s murder. On the right is a picture of Sean Toomey, 15, who was shot in the head earlier this year.
(Screenshot of press conference/ family handout)

His stepfather is a county detective. Gregory Smith, 21, has been arrested for his slaying.

Lewis said she voted for Krasner, a former public defender who ran on a progressive platform that promised lighter sentences for murder, bail reform and an end to prosecuting low-level crimes — including prostitution and certain thefts.

He took office in January 2018 and was reelected late last year — despite soaring crime rates.

She said she would have never supported him had she known he would give a free pass to criminals.

A group of Pennsylvania state representatives, Tim O’Neal, Josh Kail and Torren Ecker, announced earlier this month that they had opened impeachment proceedings against Krasner for dereliction of duty.

VIOLENT CRIMES ON THE RISE IN 2022, FOLLOWING PREVIOUS UNPRECEDENTED SPIKE IN MURDER

GOP state Rep. Martina White, who is backing the impeachment effort and represents sections of Philadelphia, said residents are “living in fear.”

Nakisha Lewis called for the impeachment of Philadelphia District Attorney Larry Krasner Tuesday at a press conference. Her son, Domonic Billa, was murdered at a mall in March 2021.
(Screenshot of press conference)

“This is not political, this is common sense,” White said. “By not enforcing the laws that were designed to keep us safe, the impact on our communities is devastating.”

There were 562 homicides in Philadelphia in 2021 compared to 315 in 2017 — the year before Krasner took office, she said, citing police statistics.

John Toomey, the grieving father of 15-year-old Sean Toomey, who was gunned down while unloading water from his family’s car outside his home in March, said the “DA is culpable” for his son’s murder.

A photo combination of Nakisha Lewis calling for the impeachment of Philadelphia District Attorney Larry Krasner (on the left) after her son, Domonic Billa (pictured on the right) was murdered.
(Screenshot of press conference/ family handout)

The teen was fleeing an attempted carjacking when he was shot in the head, according to FOX29.

The father remarked that it was his first time in the state government building, where people usually got to apply for permits or pay parking tickets.

“I wonder who I’m going to see about this, huh?” asked John Toomey, his eyes filled with tears, as he held a poster with a picture of his son, who would have turned 16 on Tuesday. “Who is going to see that my 15-year-old kid [isn’t] getting killed on the street?”

He said it was not Krasner’s job to act as a defense attorney and advocate for criminals — but his responsibility to prosecute them. There have been no arrests in his son’s case.

The shattered father said in his final statement to the crowd, “I say we impeach this son-of-a-b—-!”

Rebecca Rosenberg is a veteran journalist and book author with a focus on crime and criminal justice. Email tips to rebecca.rosenberg@fox.com and @ReRosenberg.