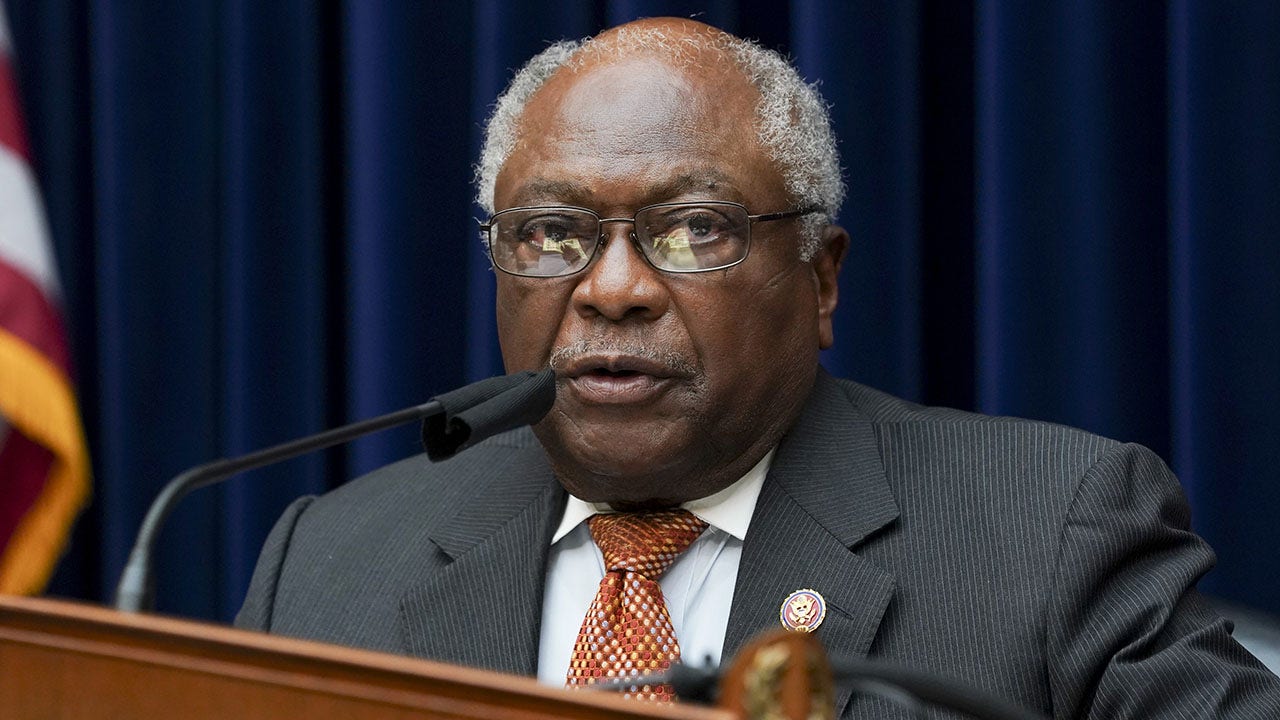 Rep. James Clyburn, D-S.C., blamed the Trump administration for the record-level inflation rates during an appearance on CNN’s “New Day” on Monday.

With economists predicting that a recession could be inevitable, host John Berman asked Clyburn what the representative thought of the economy under the Biden administration.

“Well, none of us are pleased with the economy. We know what a deep hole we were in,” Clyburn admitted.

Chairman Rep. James Clyburn, D-S.C., speaks as Federal Reserve Board chairman Jerome Powell testifies on the Federal Reserve’s response to the coronavirus pandemic during a House Oversight and Reform Select Subcommittee on the Coronavirus hearing on Capitol Hill in Washington, Tuesday, June 22, 2021. (Saul Loeb/Pool via AP)

While Clyburn acknowledged that the various spending bills passed under President Biden affected inflation rates, he argued that the spending packages were a result of reacting to President Trump’s “iinept” coronavirus response.

“I know how inept the previous administration was in terms of getting out in front of this virus. We got ourselves into a deep hole, and in order to get out of that hole, we had to ratchet up spending. We put money in the economy. We tried to keep businesses open, tried to keep people with income in their pockets,” he said.

He admitted those actions caused inflation but blamed Trump for how long it’s taking to get inflation under control: “And whenever you do that, you run the risk of inflating things. And what you then have to do is try to find some balance in all of that. And we’re searching for that balance. We’ll get there. But it took some time because of the ineptness when it came to getting out in front of this virus.”

Bank of America Global Research strategists raised the odds of the economy sliding into a recession in 2023 up to 40% Monday. The Federal Reserve raised its benchmark interest rate by 75-basis points on Wednesday.

President Biden said that he’s not concerned about a recession.
(Getty Images)

CNN ECONOMIC ANALYST SAYS IN ORDER TO HAVE A ‘KINDER’ ECONOMY, INFLATION NEEDS TO OCCUR

“Well, you know, I’ve advocated such. I think using the strategic reserves the president has been using, I think that is one step. That may not be the only step to take. Maybe we need to move to a gas tax holiday. I certainly would support that if we did,” Clyburn said.

“Well, you know, there’s no question in my mind that Joe Biden is doing exactly what needs to be done for this great country of ours. We all know that our democracy is teetering on edge. We need a Joe Biden to get us through this rough patch. And I think he’s doing great with that,” Clyburn said.

Lindsay Kornick is an associate editor for Fox News Digital. Story tips can be sent to lindsay.kornick@fox.com and on Twitter: @lmkornick.