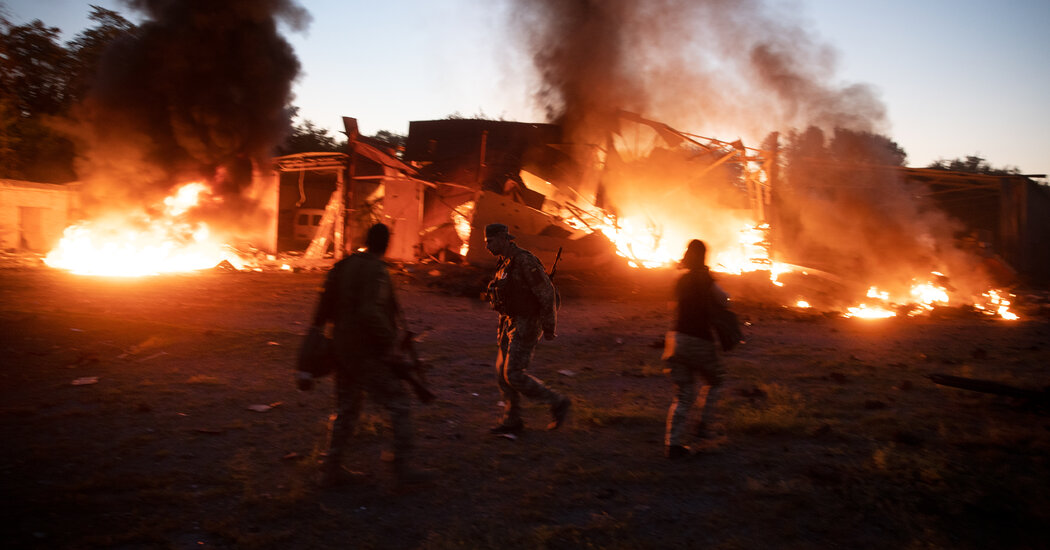 LONDON — The Russian blockade that has stopped Ukraine from exporting its vast storehouses of grain and other goods, threatening starvation in distant corners of the globe, is a “war crime,” the European Union’s top foreign policy official declared Monday.

The remarks by the official, Josep Borrell Fontelles, were among the strongest language from a Western leader in describing the Kremlin’s tactics to subjugate Ukraine nearly four months after it invaded, and with no end to the conflict in sight.

Before Russian forces began pounding Ukraine in February, it was a major exporter of grain, cooking oil and fertilizer. But the Black Sea blockade — along with Russia’s seizure of Ukrainian farmland and its destruction of agricultural infrastructure — has brought exports to a near standstill. The latest blow came Monday, when, Ukrainian regional authorities said, a Russian missile razed a food warehouse in Odesa, Ukraine’s biggest Black Sea port.

Russia has denied responsibility for the collapse of Ukrainian exports. But Moscow’s naval dominance of the Black Sea, Ukraine’s only maritime shipping route, gives the Russians significant leverage. President Vladimir V. Putin has said he will lift the blockade if sanctions, imposed by Western and other governments because of the war, are removed.

The drop in grain exports from Ukraine, once the breadbasket of the former Soviet Union, has contributed to a spike in global food prices. The United Nations has warned of hunger or even famine in some countries, particularly in Africa.

“You cannot use the hunger of people as a weapon of war,” Mr. Borrell said after arriving in Luxembourg for a meeting of E.U. foreign ministers. “Millions of tons of wheat remain blocked in Ukraine while in the rest of the world, people are suffering hunger. This is a real war crime, so I cannot imagine that this will last much longer.”

President Volodymyr Zelensky of Ukraine made the same point in a remote address to the African Union on Monday. Moscow has deep ties to many African countries, which have been reluctant to criticize the invasion.

The European Union, the United States and others are working on improving land routes for Ukraine exports, but Mr. Zelensky said that a “much smaller volume can be supplied via new routes, and it takes much more time.”

The war was reverberating in other ways beyond Ukraine’s borders on Monday, including energy shortages, fuel inflation and climate change.

At least three European powers joined Germany in taking emergency steps to ensure winter heating and power supplies — including through the increased use of coal, a big contributor to global warming. Italy, Austria and the Netherlands said they were moving to arrange for alternative energy supplies, possibly including more coal, the world’s dirtiest fuel, following a similar announcement on Sunday by Germany, Europe’s biggest economy. Denmark said it was also activating a plan to deal with looming shortages of gas that had been supplied by Russia.

The developments came as Russia, far from feeling the pain of lost fuel sales, found a savior in China, which reported on Monday that it was now the biggest buyer of Russian oil.

In the United States, where the Biden administration has attributed sharp inflation in gasoline prices to the absence of Russian oil because of Western sanctions, President Biden said he was considering a suspension of fuel taxes to ease the strain on consumers.

In a new signal that U.S.-Russia relations over the war could deteriorate further, the Kremlin said Monday that two American fighters who had gone missing in Ukraine had been taken into Russian custody and would be treated as criminals, denying them the Geneva Convention protections given to prisoners of war.

Speaking to NBC News, Dmitri S. Peskov, the Kremlin’s spokesman, said that the two Americans, Alex Drueke, 39, and Andy Tai Ngoc Huynh, 27, were “soldiers of fortune” who had been engaged in shelling and firing on Russian forces and should be “held responsible for the crimes they have committed.”

The sanctions imposed on Russia also played a role on Monday in an escalating confrontation with Lithuania, a member of both the European Union and NATO.

The Russian authorities threatened Lithuania with retaliation if the Baltic country did not swiftly reverse its ban on the transportation of some goods to Kaliningrad, the Russian exclave between Lithuania and Poland. Citing instructions from the European Union, Lithuania’s railway on Friday said it was halting the movement of goods from Russia that have been sanctioned by the European bloc.

Mr. Peskov, the Kremlin’s spokesman, told reporters the situation was “more than serious.” He called the new restrictions “an element of a blockade” of the region and a “violation of everything.”

Accustomed to Russian threats, officials in Vilnius, the Lithuanian capital, took Moscow’s warnings as mostly bluster — the latest in a series of increasingly intemperate statements by a country that is severely stretched militarily by its invasion of Ukraine.

“We are not particularly worried about Russian threats,” said Lauynas Kasciunas, chairman of the Lithuanian Parliament’s national security and defense committee. “The Kremlin has very few options for how to retaliate.”

Still, Russia’s fury at Lithuania followed a warning on Monday by Mr. Zelensky that Moscow would initiate “greater hostile activity” against Ukraine and European countries in the coming days in response to his nation’s efforts to join the European Union.

Up to 50 percent of all rail cargo shipped between mainland Russia and Kaliningrad — which Russian officials said includes construction materials, concrete and metals among other items — will be affected by the ban announced last week. The restrictions exposed the acute vulnerability of the region, which is part of Russia but not connected to the rest of the country.

Gripped by increasingly aggressive nationalism, Russia has ditched policies that promoted Russia as part of Europe and has moved advanced Iskander missiles into Kaliningrad. Lithuania’s defense minister said in April that Russia had stationed nuclear weapons in the region, a claim Moscow denies.

Russia’s relations with Lithuania, which like Ukraine was once part of the Soviet Union, have never been close, but they grew still more frayed in recent months as Lithuania took a leading role pushing for tough E.U. sanctions against Russia over its invasion.

Just two weeks ago, a member of Russia’s Parliament from the United Russia party submitted a draft law declaring Lithuania’s 1990 declaration of independence illegal. The bill aims to reverse the dissolution of the Soviet Union, something Mr. Putin has lamented as “the greatest geopolitical tragedy of the 20th century.”

Most of the fighting in Ukraine in recent days has centered on the small town of Toshkivka in Luhansk Province, part of the eastern region known as Donbas. That is where Russian forces have concentrated much of their military power as part of a plan to seize the region after having failed to occupy other parts of the country, including Kyiv, the capital, and Kharkiv, the second-largest city, in northern Ukraine.

Reports over the weekend suggested that Russian forces had broken through the Ukrainian front line in Toshkivka, about 12 miles southeast of the metropolitan area of Sievierodonetsk and Lysychansk. Those are the last major cities in Luhansk not to have fallen into Russian hands. As of Monday, it remained unclear whether Russia had made any further advance there.

But Ukrainian officials said Russian forces had intensified shelling in and around Kharkiv, weeks after the Ukrainians had pushed them back, suggesting that Moscow still had territorial ambitions beyond Donbas.

“We de-occupied this region,” Mr. Zelensky said in an address to a conference of international policy experts in Italy. “And they want to do it again.”