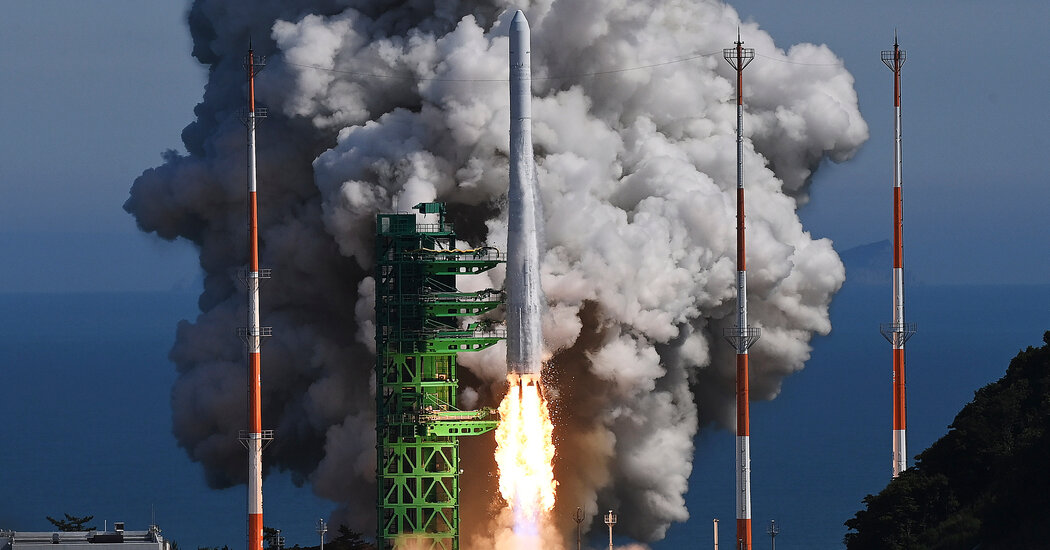 SEOUL — South Korea said it successfully launched a small but working satellite into orbit using its first homemade rocket on ​Tuesday, bringing the country closer to its dream of becoming a new player in the space industry and deploying its own spy satellites to better monitor North Korea.

The three-stage Nuri rocket, built by the government’s Korea Aerospace Research Institute ​together with hundreds of local companies, ​blasted off from the Naro Space Center in Goheung​ on the southwestern tip of South Korea at 4 p.m. Tuesday.

Seventy minutes after the​ liftoff, South Korea announced that ​Nuri had succeeded in its mission of ​thrusting a ​357-pound ​working ​satellite, as well as a 1.3-ton dummy satellite​, into orbit ​435 miles above the Earth.

I​t was a moment of national pride, with the takeoff shown live on all the country’s major TV stations, as well as on its YouTube science channels. In the run-up to the launch, the government and local media had billed the Nuri mission as a momentous event through which South Korea would secure a foothold in space technology, the latest high-tech market where the country has decided to become a player.

“South Korea’s science and technology took a great step forward today,” said Lee Jong-ho, the government’s science and technology minister, announcing the mission’s success during a nationally ​televised news conference. “We have laid the foundation for launching our own satellites when we want to, no longer having to depend on other countries’ rockets and launch stations.”

For decades, South Korea has nurtured an ambition to join the elite club of nations capable of launching communications and other satellites in orbit using domestic rockets. It also wanted to send its own surveillance satellites into space to better monitor ​a ​growing nuclear and missile ​threat from North Korea.

After multiple delays and failures, South Korea put a satellite into orbit for research and development purposes for the first time in 2013. But the two-stage rocket used for that mission — Naro — was built jointly with Russia. South Korea has spent nearly 1.9 trillion won ($1.5 billion) to develop the 200-ton Nuri, also known as the Korea Space Launch Vehicle-II, with its own technology.

In the first test launch of Nuri last October, the rocket pushed a 1.5-ton dummy satellite to space 434 miles above the Earth. But it developed a problem in its oxidizer tank and burned out sooner than planned, failing to give the dummy satellite enough speed to stabilize and stay in orbit.​ ​

In its second ​test ​launch on Tuesday, Nuri was​ carrying not only a​ ​1​.3-ton dummy satellite​ but also a 357-pound performance verification satellite​. This marked the first time South Korea has launched a​ real working​ satellite on board a domestic rocket.

The performance verification satellite will help scientists prepare to launch more satellites ​in the future by testing an antenna, generator and other satellite components and transmitting ​its trajectory data to earth, said Ahn Sang-il, a senior researcher at the Korea Aerospace Research Institute.

A​ttached to the performance verification satellite ​were four CubeSats, mini​ research​ satellites, ​which were ​built by South Korean universities. These, weighing between 7 and 21 pounds, will be released into orbit one by one starting June 29.

South Korea plans to conduct four more test launches of the Nuri system​ until 2027, including one scheduled for early next year. It is also developing a new rocket more than twice as powerful as Nuri. The country aims to land an uncrewed spacecraft on the moon using its own rocket by​ ​the early 2030s.

South Korea hopes to build satellite-based navigation and next-generation communications networks​ using its own rocket technologies​. ​It also wants to take a portion of the world’s satellite-launching market. Most rocket launches around the world have been carried out by the United States, Russia, France, China, Japan and India.

The launch on Tuesday highlighted an arms race on the Korean Peninsula. South Korea has no military spy satellites of its own, relying instead on American satellites to watch North Korea. As the North’s missile threats have grown, ​however, ​South Korea ​has wanted to place its​ own​ “eyes and ears” in space ​using its own rocket​s​.

North Korea’s leader, Kim Jong-un, told a Workers’ Party meeting last year that his government had completed the design of a military reconnaissance satellite. He said his country would deploy the satellite in the near future​.

The United Nations Security Council bans North Korea from launching space rockets because it said they were used by Pyongyang to develop long-range ballistic missiles. In defiance of this ban, North Korea launched satellite space vehicles before it successfully tested three intercontinental ballistic missiles in 2017.

Between Feb. 27 and May 25, ​it conducted six missile tests that involved I.C.B.M.s or I.C.B.M. components, according to ​United States and South Korean officials. In the first two of those tests, North Korea said it was testing a satellite launch vehicle.

North Korea has​ ​accused South Korea and the United States of “double standards” for expanding ​their own space program​s​ while condemning ​the North’s space projects as a cover for a weapons program​.