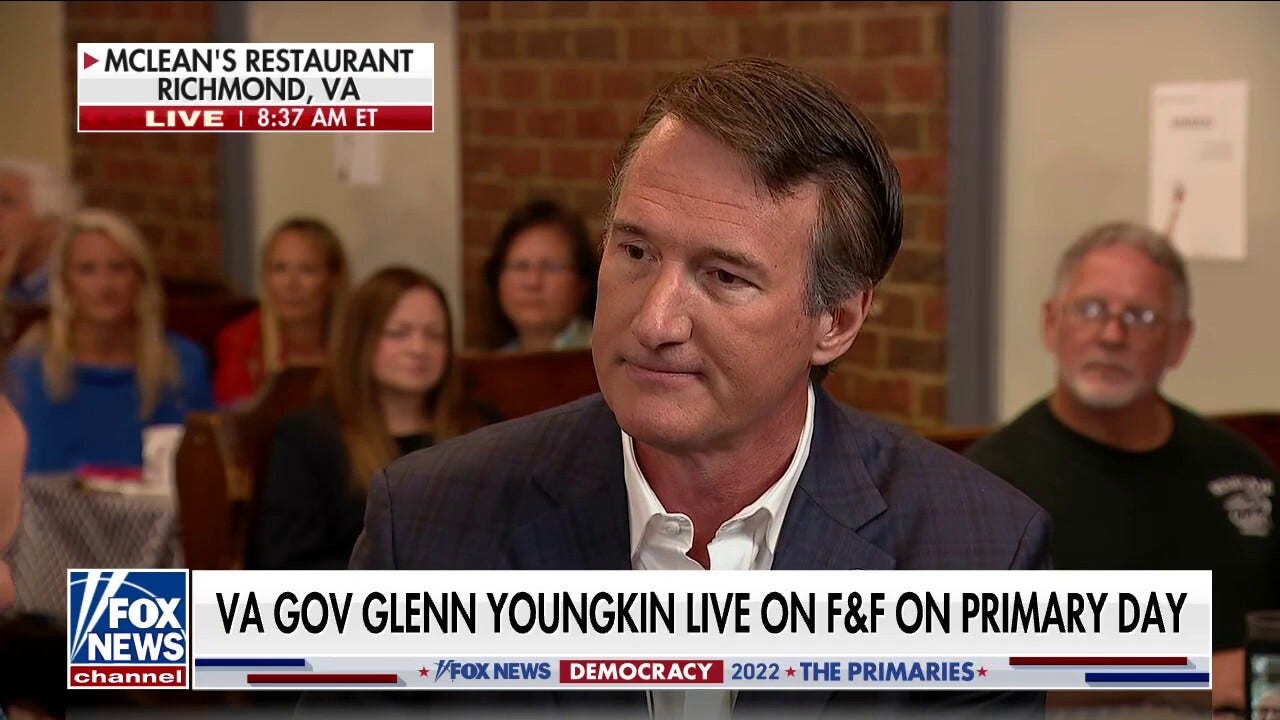 Virginia Gov. Glenn Youngkin joins ‘Fox & Friends’ on Primary Day to discuss the most pressing issues facing voters and the possibility of a presidential bid.

As Virginia voters head to the polls for primary elections, “Fox & Friends” co-host Brian Kilmeade sat down with locals and Gov. Glenn Youngkin (R) to discuss inflation, gas prices, education and other issues on voters’ minds ahead of the 2022 midterms.

Ian Prior, executive director of Fight for Schools, joined Kilmeade at McLean’s Restaurant in Richmond, Virginia, to explain why he is pushing back against woke curriculums in schools.

“What you’re seeing here is a shift in the mentality of what America is,” he said. “It should be about individual liberty, about hard work, about advancing yourself, about equal opportunity for everybody.”

VIRGINIA MOMS SOUND OFF ON EDUCATION, INFLATION: ‘I BECAME AN ACCIDENTAL ACTIVIST’ AFTER SCHOOL CLOSURES

Prior said the push for critical race theory is an attempt to completely restart the American education system with a focus on guaranteeing results for everyone without letting students achieve individual success.

“That’s what the Democrats want to do. They want to teach children what to think and not give them the opportunity to think for themselves,” he said.

Richmond radio host Jeff Katz argued that voters elected Republican Gov. Glenn Youngkin because they were angry and tired of Democrats’ prioritizing a political agenda rather than considering the concerns of the constituents.

VIRGINIA AG ON WOKE PROSECUTOR BEING REMOVED FROM CASE BY JUDGE: ‘VOTERS ARE TIRED OF IT’

“The economy here is terrible at the moment,” Katz said. “You’ve got crime, you’ve got the economy, you’ve got education, and frankly you have this anger with Joe Biden and Nancy Pelosi and Chuck Schumer.”

“So this is the place to be when it comes to sending Republicans to D.C.,” he said.

Youngkin, who won in the historically blue state in 2021, said Virginia is changing after liberal policies “ran off the page.”

“All of a sudden, independents and a lot of Democrats said, ‘I don’t agree with any of that,’” Youngkin told Kilmeade.

He explained that the broad Virginia population supports lowering taxes, encouraging parental involvement in education and support for police – an agenda he said his administration has delivered.

And as the Supreme Court is set to hand down a ruling on Roe v. Wade, Youngkin said he supports the anticipated reversal which would then leave states to determine their own abortion laws.

However, he stressed the need to keep his constituents safe as violent protests are expected in response to the ruling.

“We’re going to protect people’s constitutional right to protest, but we’re also going to make sure that laws aren’t violated,” he said. “Otherwise they’ll be arrested, and we’re going to maintain peace.”

As for his political career, Youngkin said he has not made a decision on whether to run for president.

“I am always humbled by this request, but we have a lot of work to do today in Virginia,” he said.

Amy Nelson is a producer with Fox News Digital.